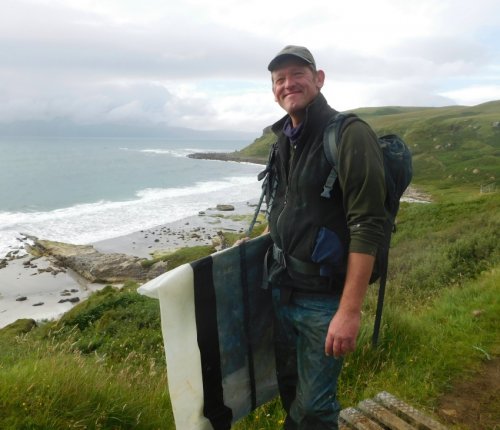 A man for all seasons    If you’re ever moved to take a walk on Dartmoor in a mid-winter thunderstorm, you might come across Stewart Edmondson, feverishly painting in a portable fisherman’s shelter. Or you might find him working as the rain courses down his canvas, alive to the velocity, height and impact of the drops.    “Winter’s a fantastic season for painting the moor,” says Stewart. “I love colossolly-bad weather and great sweeps of storm powering down to earth. On one occasion, I saw these big clouds coming over - I was there with it – snow swirling. The colours are so fantastic. The bracken around Hound Tor is a dark red-orange. But it can be best just after a storm when the light’s coming down and the bracken’s still wet.”   Stewart is especially aware of how things change as each season starts to come in. “In spring,” he says, “there’s a lot going on very quickly,” and he’ll sometimes camp out in the woods to catch the changes. “There are wild daffodils in Hembury Woods, the colours of the earth are burnt sienna and umber, and the leaf mould’s a dark reddy-brown. Then there’s the brightness of the first leaves on the beech trees – a colour that’s breathtaking. It can be pouring down with rain, but it still looks as though the sun’s out because of that incredibly bright green.”   He finds summer the most difficult season to capture as there’s less variation of colour: “The moor’s all green. It’s very different from autumn when there’s a contrast between the light on the water and the colour of the leaves. As summer changes to autumn out at Coombestone Tor and Bench Tor, you get the reds of the hawthorn and rowan berries, the mix of heather and gorse, and large flocks of fieldfares and redwings coming in from Scandinavia. I like clouds too, and you get more in autumn - more moody skies. It’s just a joy.” Being still in a natural setting can bring all manner of surprises. He recalls a day spent below Hound Tor near the remains of a medieval village when he was visited by a barn owl, hovering only a metre or so above his head for a full twenty minutes before swinging round and silently floating away.   When Stewart goes out to paint, the choice of place is uppermost in his mind. “It’s a case of what I’m most moved to do that day. I go for whatever’s on fire for me. I might do two or three paintings in a bluebell wood and then I’d have to do something else.” His concentration is so intense that he finds there’s a great difference in his apprehension of a place between arriving and leaving. “I just notice so much more because my level of perception has deepened so much. I could do ten more paintings. But next day, of course, it’s all changed.”   He will often begin work by doing simple sketches of light and dark structures for twenty minutes or so. He paints with a watercolour base and acrylic ink, often quickly scratching off paint with his finger nails or a sharp knife to achieve a particular tone. He admits to naivety in his use of colour, but he’s fascinated by vibrations of colour in the natural world.   Tall, loose-limbed and tanned, he talks with his body, constantly shifting position as he speaks. When I ask a question, he will frequently throw his head back and laugh – as though this were something impossible to answer. Then he goes quiet and it’s clear that he’s thinking deeply. Then he bursts forth with a passionate

response that demonstrates a life lived holistically: his answers combine thought, emotion and a highly sensuous response to the natural world.   As a child, Stewart always wanted to be an artist. His father was a printer and paintings by his great-grandfather hung on the walls at home. In his teens, he was encouraged by a local gallery owner. He trained, however, as a landscape architect, subsequently working for the Urban Wildlife Trust in Birmingham and for the Devon Wildlife Trust. He followed this with three years’ travelling, finally reaching Australia where he had gone to a Deep Ecology gathering. Australia, however, provided a life-changing experience when he was hit by a truck while out walking.   Once he’d recovered, painting began to take centre stage. His first pictures were large acrylics of wildlife for a permanent exhibition at Cape Byron Headland Reserve in New South Wales. And with the birth over here of his son, Luis in 2002, a flood of creativity was released in him.   His ability to allow “something that is beyond my control to come through and express itself in a painting” is almost certainly responsible for the effect that his work has on viewers. People are genuinely moved, and he finds it ironic that his painting has been much more effective in spreading a message than his environmental work.   His love of the natural world had been nurtured in boyhood. “My Mum and Dad were passionate ramblers and my Dad an accomplished fell runner. I used to spend hours polishing his trophies and medals. We spent most weekends on the Yorkshire moors or in the Dales, and on special holidays we went up amongst the fantastic peaks of the Lake District.”   As a largely self-taught painter, Stewart is concerned not to be over-intellectual in his work. As a past illustrator of environmental books, he’s also wary of being too ‘ illustrative’. “It closes down the emotional expression for me,” he says. He’s drawn to wild places and finds it easier to have the kind of relationship he needs with the natural world when he’s alone. “I feel frustrated,” he says, “if I can’t at least touch on a quality – on something coming out of the unity of the place itself and my being in that place. There can be a sort of sacredness in that.”
join my mailing list